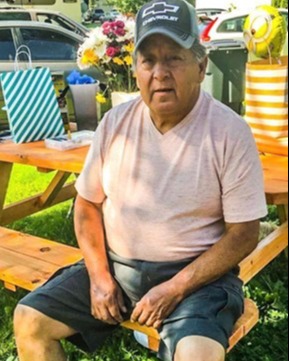 Roberto Soto Frausto, age 69 of Espanola, went to rest with the Lord on October 11, 2022 in Santa Fe after a courageous battle with cancer.

Roberto was preceded in death by his daughter Juanita Soto; his parents Vicente Soto and Soledad Frausto.

Roberto was born June 18th,1953. Graduated from Coahuila Mexico and retired from working in the meat market in (Food King and Center Market) and other jobs. He was a very hardworking family man and loved to spend time with his wife Leticia Nava de Soto, his children and especially his grandchildren. He also loved to go out to eat with his nephew Juan Maldonado and wife Lupita at La Fonda de Sol restaurant.  His hobbies were to watch his favorite soccer teams Santos Laguna and Mexico play soccer, loved to eat and listen to his favorite music from Vicente Fernandez. Always helped anyone in need and will be dearly missed by his friends and family.

Rosary will be held at Devargas Funeral Home at 6pm on October 25th, 2022. Memorial Mass will take place on Thursday October 27, 2022 at 10:00am at Holy Cross Catholic Church in Santa Cruz.

The Family of Roberto has entrusted the gentle care of their loved one to DeVargas Funeral Home in Espanola, New Mexico. (505)747-7477 www.devargasfuneral.com

To order memorial trees or send flowers to the family in memory of Roberto Soto Frausto, please visit our flower store.