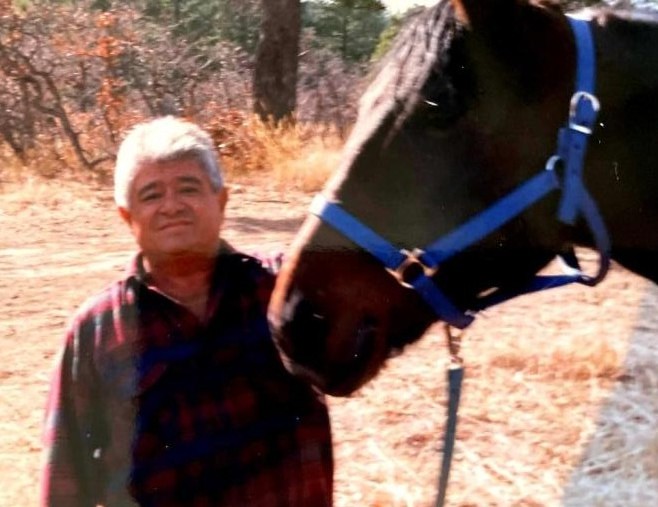 Pablo Roybal, 80, from Chimayo and formerly of El Rancho passed away into eternal rest on January 20, 2022.

He is survived by his wife Albina Roybal, Son Matthew Roybal(Shaylee),  Mother of his Son Irene Roybal, Brother’s Luciano and (Bernie), Florencio and (Jeanie), Manuel and (Lucy), David, Abel and (Betty); Sister’s Julia, Jane, Gloria, Ruth, Nora, Esther.  He was very loved by his extended Vigil family and close Sister in Law Adriana and Lalo.  Godchildren, Yvette Manzanares, Christa Hernandez, Veronica Martin, Gabriel Roybal.  Several nieces, nephews, children who loved and admired him as a grandfather.   Pablo always had a special love for Children, and it was not uncommon to see him holding a child in his arms.

In his early career he was a skilled jack of all trades, later joining the Los Alamos National Laboratory.  His career was focused on serving LANL until his retirement in 2004 from P division.  He was greatly loved by all who knew him.  His passion for his family, and being a pilar for those in his life were evident.  He was small in stature, however big in presence.  There wasn’t a task he couldn’t accomplish, and when asked for help he always lent his time and helpfulness.  He will be greatly missed by those whose lives he touched both young and old. Pablo was master horseman his entire life.  Loved being in the wilderness. Funeral services are being held at the New Fire First Assembly Church at 10 am in Jacona, New Mexico. Burial to follow in El Rancho, NM

The family of Pablo Roybal has entrusted the care of their loved one to the DeVargas Funeral Home of the Espanola Valley. 5057477477www.devargasfuneral.com

To order memorial trees or send flowers to the family in memory of Pablo Roybal, please visit our flower store.