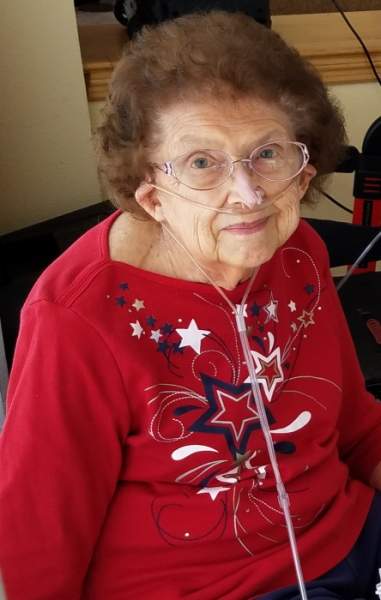 Miriam Deen (Martin) was born in Goldfield, Iowa, to Roy B. Martin and Fannie Grace Martin on January 22, 1927.  She was the youngest of four children:  Don B. Martin (Margaret), Leon E. Martin (Dottie), and Cleo Martin.  Don and Leon were biologically the sons of Agnes Martin, who died with complications of appendicitis when the boys were very young.  Grace Martin raised them, along with Cleo and Miriam, and all grew up as a happy family.

Miriam attended a one-room country school in Iowa during the first eight grades of her education, and she graduated from Eagle Grove High School in 1945.  She received her Bachelor of Arts degree with an English major from Iowa State Teachers College in Cedar Falls, Iowa, in 1949.  In 1958, she received her Master of Arts degree from Eastern New Mexico University. She took various courses and workshops after that time.

On June 11, 1950, she married Philip Harry Barck in Goldfield, Iowa.  From this union, the couple welcomed two daughters, Emily and Rebecca.  The marriage was dissolved in 1972.

In 1983, Miriam married Harrison Scott Deen of Portales, New Mexico. They made their home west of Portales until 1993, when they moved into their new home in the city of Portales. They were members of Central Christian Church, where she served as pianist for many years.

Miriam’s biggest interest was in her family.  She enjoyed visiting them whenever they lived if at all possible. She enjoyed Yellow Ribbon Reintegration Activities (Army) upon Emily’s return from her last military deployment, and other military events in which her daughter, Emily, took part, and she proudly exclaimed to everyone that her daughter was “a Colonel in the Army!” She was equally proud of Rebecca, a French teacher at Bryn Mawr School, a private, all-girls K-12 school in Baltimore, MD. Then there were her two grandchildren, Luke and Adelaide Schulman, whose visits she looked forward to their visits whenever they could travel.

Miriam’s teaching career encompassed fifty-three and one-half years at the high school and college levels. In New Mexico, she taught at Floyd High School, Santa Fe High School, and Portales High School. Her college teaching experience included serving as Instructor of English at Northern Arizona College in Flagstaff, Arizona; teaching at the University of Arizona in Tucson, Arizona; and serving as an adjunct faculty member at Eastern New Mexico University from 1989 – 2014.

Miriam worked tirelessly to further education and to support others in the teaching profession. Miriam was President of Delta Kappa Gamma Teachers’ Society, and was a longtime member of PEO, Chapter R, philanthropic society, in Portales. She was recording secretary for the Board of Education in Farmington for six years. She served as sponsor of the Demon Tatler, high school newspaper, in Santa Fe. She sponsored the National Honor Society and was a class sponsor at Portales High School. She was class sponsor at Floyd High School and went with classes on their senior trips in the 1950’s. She made many sacrifices for her daughters to include teaching summer school and home school, so her daughters could participate in sports, band, and music.

Miriam was a faithful member of Central Christian Church, Portales, New Mexico, where she played the piano for twenty years, and participated in many church activities. When she moved to Santa Fe in 2019 to be closer to her daughter, Emily, she rejoined St. John’s United Methodist Church, the church in which she raised her two daughters during the time she taught at Santa Fe High School (Miriam Barck).

Miriam was inquisitive by nature and enjoyed traveling. Her travels included trips to The Holy Land, Hawaii, Canada, Mexico, New York City, France, England, and many other locations in the States. In fact, she traveled with the Theater Dept of ENMU to New York City with Harrison six times. Miriam and Harrison also went with some frequency to Iowa and to Branson, Missouri.

The family of Miriam Deen has entrusted the care of their loved one to the DeVargas Funeral Home and Crematory of the Espanola, Valley, New Mexico 505-747-7477 www.devargasfuneral.com

To order memorial trees or send flowers to the family in memory of Miriam Deen, please visit our flower store.