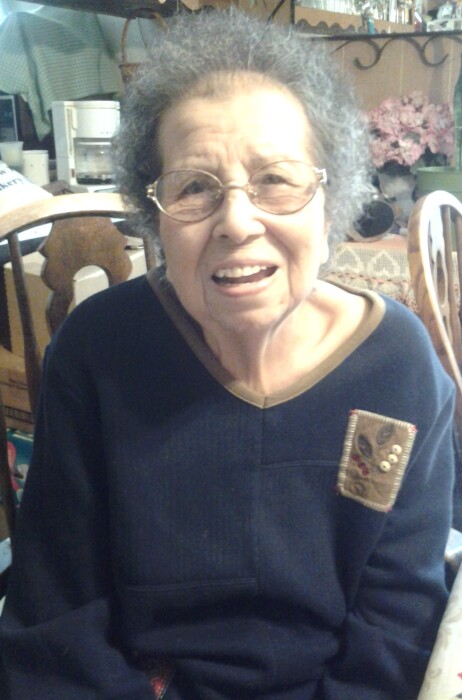 LEONILA (NILA) SENIA MARTINEZ DURAN, 85, a long-life resident of Fairview, New Mexico was called by the Lord to enter the gates of heaven on Monday, September 21, 2020. Leonila was a member of Temple Baptista church of Santa Cruz, New Mexico; and a member the first Spanish baptist in Espanola,  a member of first First Baptist church of La Joya, New Mexico, Indian Baptist church of El Llano New Mexico. Leonila was a dear and faithful Christian woman committed to her savior, Christ the Lord and was very well loved by everyone she encountered within her life. She enjoyed playing the piano, guitar, accordion, organ, and singing her favorite hymns. Leonila was talented for her sewing, quilting, embordering, cross-stitching, crocheting, pottery, weaving rugs, cooking and baking skills. She had lots of friends and most of all she loved her family. Leonila attended La Petaca Elementary and Junior school, the proceeded to attended Ojo Calente High school, freshmen. Leonila was an Avon sales representative for 15 years, and a salesclerk for Peoples department store for 15 years and was employed until peoples department store closed its doors to the city of Espanola New Mexico. Leonila was proceeded in death by her husband Jose C. (Claudio) parents: Teodoro and Fermiliana Martinez brothers; Dennis Martinez; Ernesto (Tito) Martinez; Ted (Teodoro) Martinez; Harry (Len) Martinez; sisters: Amelia Gruba; Lydia Maestas; Alice Herrera. Leonila is survived by one daughter, Brenda Lee Marcella Duran of Fairview, two sons, Rudy Joseph Duran (Nora) of Las Vegas Nevada and Harold Duran of El Llano; brothers, Inez Martinez (Odelia “Dee”) of Las Vegas, Henry Isadias Martinez (Rose) of Chimayo; sister-in-law, Lorence Martinez, of Petaca; granddaughters, Anna Angelica Salazar of Fairview, Amy Duran (Anthony) of Nambe, Robin Martinez (James) of El llano, grandson, Fabian R. Duran of Las Vegas Nevada Jeffery T. Duran of Las Vegas Nevada, great grandchildren, Mateo Hartado of Nambe, Demetrus Martinez of El Llano; Goddaughters, Ruby Medina of El Llano, Dorothy Mae Rendon of Lighting,  a very dear friend which she considered as a sister Helen Salazar of Chamita, a dear friend whom she had a special bond with Guadalupe Martinez of Chimayo; and many nieces, nephews who loved her very much. Leonila will be dearly missed by all who knew and loved her. Leonila departed from us by a blink of an eye we know she was called by he Lord to be in his presence. The family of Leonila Duran would like to extend their deepest gratitude to Dr. Charles Maestas, Dr. Annette Maes, staff of Casa Rael Nursing Home located in Santa Fe for their tender and care of our beloved Leonila (our Mother). Funeral will be held on Monday at 11:00 a.m. at the First Baptist Church on La Joya St. with a burial to follow at Loma vista Cemetery in Alcalde. The family of Leonila (Nila) Senia Martinez Duran has entrusted the care of their loved one to the DeVargas Funeral Home & Crematory of the Espanola Valley. 505-747-7477-www.devargasfuneral.com

To order memorial trees or send flowers to the family in memory of Leonila Martinez Duran, please visit our flower store.