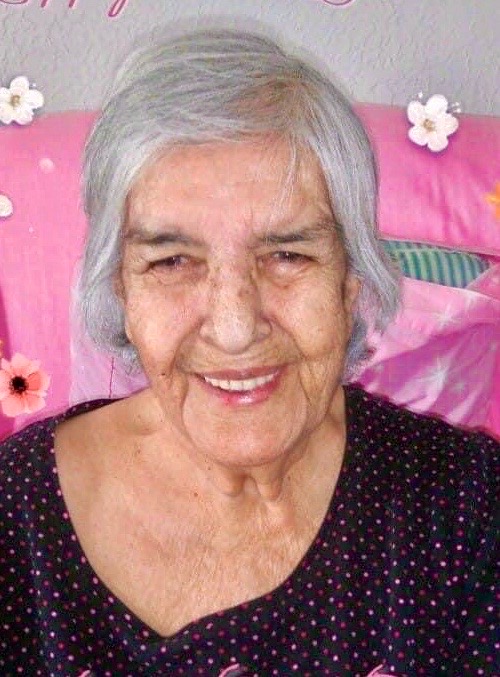 Josefita “Josie” Baca Romero, age 91, passed away Monday, December 21, 2020 at her home in El Valle del Arroyo Seco, New Mexico, surrounded by her loving family.  Josie was born in the village of Villanueva, New Mexico to her parents, Fidencio Galiz Baca and Juanita Gonzales Baca.  She attended elementary school in Villanueva, NM and later continued her education attending the Nambe and Pojoaque, NM schools.  She was raised as a fervent Catholic and, constantly built on her Christian faith, raising her children to grow fervor for it, and a strong faith in God Almighty, Jesus Messiah, and the Holy Spirit.  In her youth she had a desire to join a convent and become a nun.  God had other plans for her.

She was united in holy matrimony on January 6, 1946 to Jose Otoniel Romero of Nambe NM.  Together they raised their family of 12 children, and mourned the death of one child (Johnny) born full term, but taken by God, his Maker, shortly after birth.

Josie was a strong, faithful woman filled with much charity and love for her family, including her parents, sisters and brothers, and her nieces and nephews.  She heroically conducted her call in life and ministry, as a mother, wife, sister and daughter with profound courage, love and prayer.  Her comforting and tough love continually helped those she cared for to be that better person they could be.  Josie served as a Home Health Aide for the State of New Mexico for several years, where she became a popular caregiver, constantly being name requested by clients and patients.  She also worked with custodial services for LANL (Los Alamos Scientific Laboratory) for several years.  She loved to crochet gifts for her loved ones and was very artistic.  Josie enjoyed her grandchildren, great grandchildren, and great great grandchildren, tremendously, and was very proud of her large family, expressing awe about the enormity and accomplishment of it.  She lived a long full life and as one of her sons put it…  “Rest momma, you finally won the race!”  She was and always will be her family’s life long hero.

A funeral service will be held December 29, 2020 at 2:00 PM at Victory Faith Church in Espanola, NM, with a private burial (for family only) at Santa Fe National Cemetery held December 30, 2020.  The family of Josie Baca Romero has entrusted the care of their loved one to the DeVargas Funeral Home & Crematory of Espanola Valley. (505) 747-7477 – www.devargasfuneral.com.  The family would also like to extend a big thank you to GIVING Home Health Care for their superb caring and support of our mother, Josie.

To order memorial trees or send flowers to the family in memory of Josefita (Josie) Baca Romero, please visit our flower store.