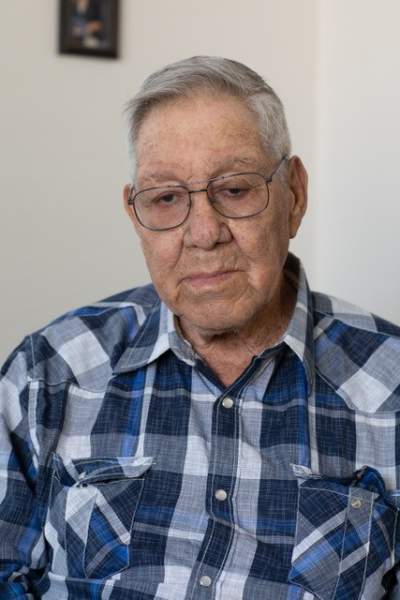 Jose was born in Plaza Blanca where he grew up working in the family ranch later on in life he started his own business Jose Upholstery Shop. Where all the locals from surrounding areas would come and have their furniture upholstered once Jose was done the furniture came out looking like new. Jose also drove the bus for the head start transporting all the kids to school. When Jose and his mom moved to Los Ojos he started working for the Los Ojos Senior Center also as a bus driver picking up the senior citizens and taking them to the center for lunch, also worked in the fields planting wheat in Las Nutrias New Mexico. Jose had friends throughout the Chama Valley, Plaza Blanca, Tierra Amarilla and in the Espanola Valley. Our Tio Joe was very knowledgeable of the Mercure Family History he was a Historian of Plaza Blanca knew a lot of history of families, any time we would go visit our Tio Joe he had stories to tell us about our family.

Jose was a devoted Catholic where he was a parishioner of San Jose Catholic Church, the Society of San Antonio de Padua in Plaza Blanca and was devoted to La Morada with the Penitentes. Jose was a member with the H.E.L.P Association and El Norte De Valle of Rio Arriba County.

The family of Jose de la Luz Mercure has entrusted the care of their loved one to DeVargas Funeral Home & Crematory of the Espanola Valley.

To order memorial trees or send flowers to the family in memory of Jose Mercure, please visit our flower store.