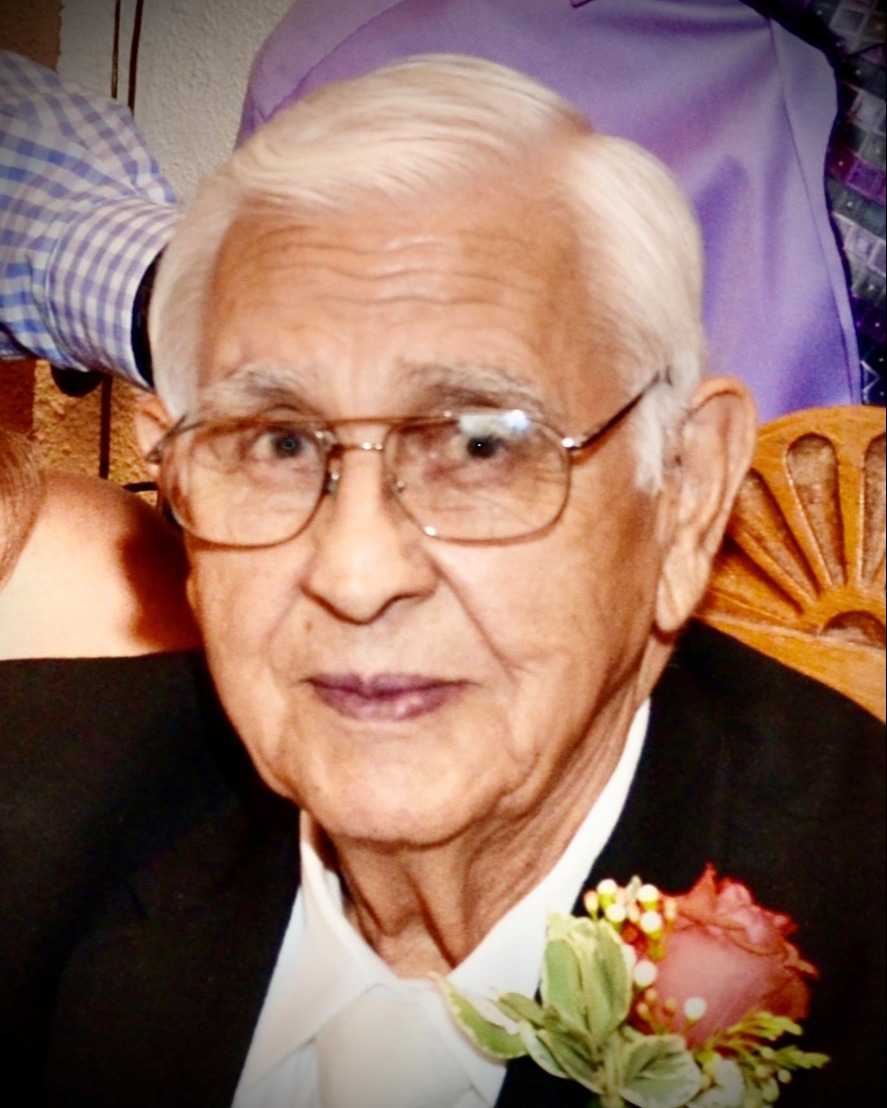 José Erminio Romero passed away at home in Sombrillo on October 30, 2022 at the age of 98. José Erminio (Joe Elmer) was born in Cuyamungue, NM on October 18, 1924 to Ascensíon Romero and Teofila Romero. In 1946, he married Matilde Vigil from Sombrillo and raised 6 boys, built a home and forged a loving family over the course of 75 years. He graduated from Pojoaque High School but was educated by the Great Depression, 1929-41. He lost his mother early, his father traveled to find work and, by necessity, was sometimes absent for long periods. As 7 children grew up, older siblings left home for work, school, or joined the Army. The role of raising 3 younger children defaulted to José and reinforced strong family collaboration and support.

After graduation, José was drafted into the Army and was sent to the Pacific theater in WWII. He served with the 25th Infantry Tropic Lightning Division in the Pacific islands of New Caledonia, Philippines, Salomon, New Hebrides, and Japan. José was a proud Life Member of the Veterans of Foreign Wars, VFW Post 2951.

After the war, he married his sweetheart, Matilda, whom he met through his brother, Francisco, who perished in France on D-Day. They successfully spearheaded efforts to name a bridge near Francisco’s ancestral home in his honor and ultimate sacrifice. José worked at Los Alamos Scientific Laboratory as a painter until his lungs were damaged by asbestosis. He forged on to become the Business Agent for Painters Local Union 869, Santa Fe and served as Labor Representative to the New Mexico District Council #63, Albuquerque, for 25 years. He was proud to be a union representative defending the rights of the working man. He represented rank and file member interests in labor negotiations with employers throughout the state for 48 years and was recognized for his efforts by the New Mexico Building and Constructions Trades Council. In 1967, New Mexico Governor David Cargo appointed and commissioned José, “Aide-de-Camp” on his staff.

José enjoyed fishing, hunting, building, wood carving, farming and teaching his sons to be educated, honest, hardworking and responsible family members. He left no time for mischief. He led by example and coached Little League baseball for all his boys, carved traditional wooden sculptures, and supported Matilde with her artistic passions. José was an active parishioner at Holy Cross Parish at Santa Cruz de la Cañada Church where he and Matilde were married, their children received the sacraments and began their education. José was the oldest and longest serving member of La Cofradía de la Santisima Trinidad. José believed in community service and was a long-time commissioner for the Sombrillo Ditch Commission and a dedicated volunteer for the Santa Cruz Senior Center. He was proud to have served as Chairman for a Santa Fe Grand jury dealing with prison reform and inmate safety. José had an astute mind and assiduously discussed current local and national events with clarity and certainty. Up until his passing, José remembered dates, places, and people with astounding recall.

José was predeceased by his wife of 75 years, Matilde, who passed away just 23 days earlier. José was the last of his family and eternally joins his father and mother, sister Ophelia, brothers Bernardino, José Encarnacion, Francisco, Samuel, and Adolfo.

After just 23 days, José will join Matilde at their final resting place.

The family of Jose Romero has entrusted their loved one to DeVargas Funeral Home & Crematory of the beautiful Espanola Valley.  505.747.7477  www.devargasfuneral.com

To order memorial trees or send flowers to the family in memory of Jose E Romero, please visit our flower store.

At the Sangre de Cristo Chapel at Devargas Funeral Home