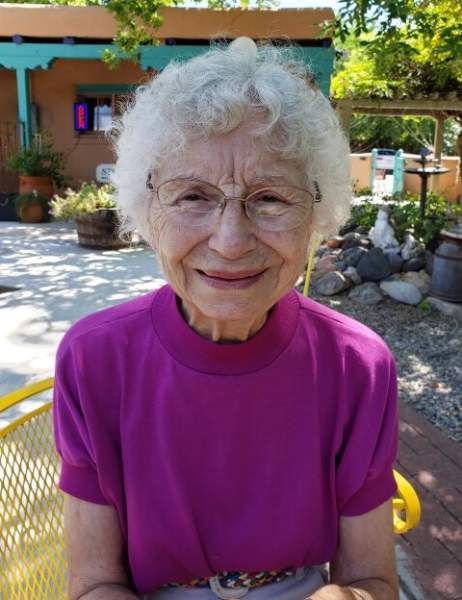 Jeanelle Colleen (Netz) Schultz passed away on Monday, June 14th.  She was 91.

The daughter of Roscoe and Olive Netz, she was born on January 15th, 1930 in Questa, NM.  During the war her family moved to Los Alamos, NM, where she attended high school and was the valedictorian for her class.  It was here that she met the love of her life, J. W. “Bill” Schultz.  They married in 1951 and settled in the Espanola Valley.  They remained together for 66 years until Bill’s passing.

Jeanelle was a lifelong member of The Church of Christ and could often be found volunteering for activities both in the church and in the surrounding community.  Nell and Bill never had children so she lavished her love on her niece and nephews, as well as sharing with the many local children that she cared for.  She also took time to volunteer at the hospital in Espanola and was “Volunteer of the Year” twice in her over forty years of service.  She and Bill traveled extensively visiting Alaska, Hawai’i, Mexico, the Azores and many points in between.  They enjoyed backpacking, camping, and skiing.  She dearly loved the culture and people of northern New Mexico.

She was predeceased by her parents, her brothers, her husband, and her niece. She is survived by her nephews and their families including many great- and grand-nieces and -nephews.  A celebration of her life will take place on Saturday, June 19th in Espanola.  De Vargas Funeral Home is handling her care for the family.

The family of Jeanelle Schultz has entrusted the care of their loved one to the DeVargas Funeral Home & Crematory of the Espanola Valley. 505-747-7477  www.devargasfuneral.com

To order memorial trees or send flowers to the family in memory of Jeanelle Schultz, please visit our flower store.