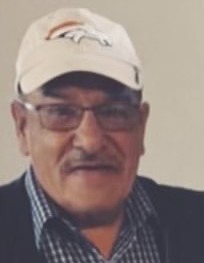 GENE ERNESTO MADRID , 75, a lifelong resident of Chama, departed this life on February 22, 2021. He was the oldest of four children and was born on December 25, 1945 to Leonila and Jose Jubinal Madrid. He graduated from Chama High School in 1963. The majority of his career was working at the Auto Parts Store in Chama. He was preceded in death by his parents and sisters, Mary and Esther.

Gene loved sports. The Denver Broncos, UNM Lobos and Escalante Lobos were his favorite teams that he followed. He was known to travel with his local buddies to Las Vegas, NV for the Mountain West Tournament. He loved the outdoors: fishing, camping and hauling wood. During the summer/fall mornings, he would be seen chasing and following the C&TSRR train up to Cumbres Pass. He had many friends throughout the Chama Valley and northern New Mexico and will be greatly missed by all.

He is survived by his companion as he would introduce her to others, “La Muchita del Mingo”, Patsy Gallegos; sons, Jerome (Bonnie), Bruno; daughter, Gina; ex-wife, Ida Espinoza the mother of his children; three grandchildren, Natasha, Tyler (T.J.) and Jordan and was expecting his first great-grand baby; Timmy Gallegos (Denise) and Pampo to Timothy and Peyton Gallegos; sister, Agnes (Danny); nephews, Ross (Kristin), Daniel (Carrie) and niece Clara (Shaun); and numerous great nieces and nephews and all of the Gallegos family.

To order memorial trees or send flowers to the family in memory of Gene Madrid, please visit our flower store.