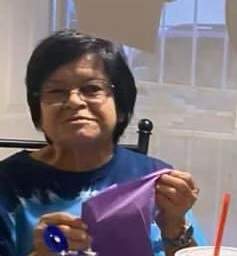 Erlinda M. Herrera 75 , a resident of Fairview passed away on December 8, 2021 of a lengthy illness.  She is preceded in death by her Parents Pablo and Flora Salazar, brother David and Andrew Salazar.

Erlinda was loving wife, mother, and grandmother.  She loved to play Bingo, fishing and camping with her family, as well as gardening.  She will be dearly missed by her family and all that knew and loved her.

The family of Erlinda Herrera has entrusted the care of their loved one to the DeVargas Funeral Home & Crematory of the Espanola Valley 505-747-7477 www.devargasfuneral.com

To order memorial trees or send flowers to the family in memory of Erlinda Herrera, please visit our flower store.