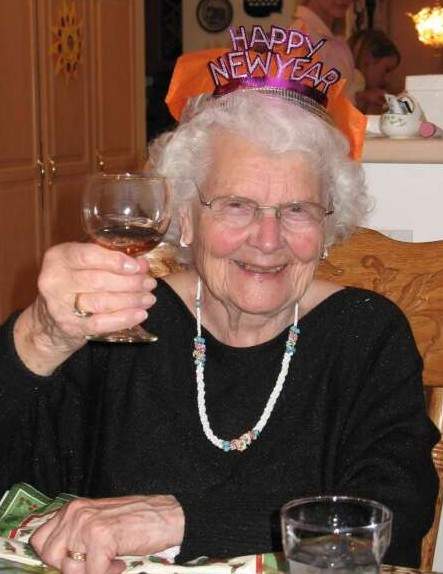 She was 106 years old, having been born on the family homestead in the Okanogan valley of North Central Washington state on February 27, 1915.

She was known as “Lucille” or “Lucy”, and became the central figure in a large extended family, remarkable for its involvement in community, spread over the Western United States, from Washington to Oregon, Idaho, Utah, Colorado and New Mexico.  Her descendants included librarians, nurses, attorneys, architects, public health specialists, competitive mountain bikers, loving parents, wine makers, physicians, adolescent counsellors and educators, deputy sheriffs, molecular biologists, and more.   Her beliefs in kindness, in the value of education, and of contribution to children and community shone throughout life and are her legacy.

Her beginnings were humble; she was delivered at home by her midwife aunt on a now-vanished home a few miles west of the town of Okanogan, off Highway 20, the northernmost route through Washington’s Cascade Mountain range.   Once schooling in nearby Okanogan began, she remembers being sent to school on benches installed on the back of a flatbed truck, with a hot potato in each pocket fresh from the wood stove, as both handwarmer and lunch.

As a child, entertainment included exploration of the sage steppe of the Okanogan.  She passed on her knowledge of the flora and fauna of that region to her children and grandchildren, and particularly loved the spring wildflowers; her favorites were bluebells and sage buttercups, which were blooming beneath the sage of the North Cascade foothills at the time of her passing.

She was the fourth of six children raised by her parents, Francis Marion Whitley and Nellie May (Vandiver) Whitley, on the grounds of the old Boston and Okanogan apple orchards west of Okanogan, where her father was an orchard manager.    Her youngest sibling was adopted by the Whitley family when the circumstances of the Great Depression did not allow her own family to stay together.

When the time came for Lucille to consider her future, she remembers telling her father she would follow her two older brothers to Washington State University (College, then).  He had hoped she would stay in Okanogan, but assented to her leaving, and tearfully walked around his workshop, pulling dollar bills from secret hiding places and giving them to her so she could afford her first tuition payment.   Thereafter, she lived with her brother and his wife, and worked at the student bookstore at WSC to pay her way through college until she married her husband Richard on December 21, 1935.

Richard was initially a school administrator in eastern Washington, but then attended dental school in Oregon in 1944, returning with his growing young family to the Palouse country of eastern Washington, working for a year as a school superintendent while he established a dental practice.  Lucille and her family lived in Southern California for a time during the Korean war, when her husband was a Navy dentist, until the war ended.  The family then returned to the Palouse.

In the 1980’s, Richard and Lucille retired to another eastern Washington community they had lived in early in their marriage, Chewelah, to be near a daughter and her family, and Richard died there in 1987.

Lucille continued to live in Chewelah, active in church and PEO (which she was a member of for 81 years), until moving to Aspen Ridge retirement home in Los Alamos in 2007, to be near the New Mexico branch of her family.

At Aspen Ridge, she became known not only as the oldest member of her community, but also as one of the most cheerful and loving.   She often spent time in the library there, walked to bingo and exercise class and ice cream socials, eventually with a walker, but always on her own.   She would apologize if caught watching television, explaining that she knew reading was better for her mind.  Outings included attending basketball games of her great-grandchildren in Los Alamos, and she was delighted when her presence as the eldest fan would be announced.

In the last year, marked by physical separation from her family because of the pandemic, she began to decline and was confined to a wheelchair.  But she maintained her cheerful view, enjoying the birds at the feeder and the view of the southwestern canyon country at her window, enjoying ice cream and navigating the wheelchair to the Aspen Ridge fireplace, where she would nap.

During the long quarantine of the pandemic, and with the help of a dedicated caregiver, Shirley Trujillo, she was able to regularly FaceTime with many members of her family, including her great-grandchild namesake, Lucy,  age 6, in Woodinville, Wa.   She received a timely vaccination for Covid, and was able to meet for ice cream to celebrate her 106th birthday with family members in February, receiving a hug from her son Richard II for the first time in a year.

Even during this year of decline, she remained content.  She was quietly spiritual, joyful in connection with family and caregivers, and accepting of her circumstances.  She lived her belief in the serenity prayer, which she had often repeated for her children: “Change what you must, Accept what you cannot, and Have the wisdom to know the difference”.

She was preceded in death by her husband, by her parents, by two brothers (Floyd Whitley and Cecil Whitley), three sisters (Esther Whitley Sousa, Rhoda Whitley Howell and Shelley Livingston).

To order memorial trees or send flowers to the family in memory of Della Lucille Honsinger, please visit our flower store.