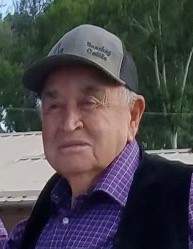 David was a member of Immaculate Conception Church. He worked for the Railroad in Nevada and Utah before moving back to Cuba where he retired from the Duke City Lumber Company. After retiring David went on to do what he enjoyed the most, running his ranch.

A viewing will be held at Immaculate Conception Church in Cuba, NM on Friday May 14, 2021 at 6pm with a rosary at 7pm. The final viewing at 10am on Saturday May 15, 2021 with funeral mass at 11am. Burial will follow at Cuba Catholic Cemetery. Pallbearers Matthew, Daniel, Joseph, Andrew, Benjamin, Josiah and Jonathan Sanchez and Adrian Cordova. Honorary pallbearers will be all his grandchildren.

The family would like to thank Armada Hospice for all the support that was given. The family has entrusted Devargas Funeral home of 623 North Railroad Avenue, Espanola, NM 505-747-7477.

To order memorial trees or send flowers to the family in memory of David Sanchez, please visit our flower store.