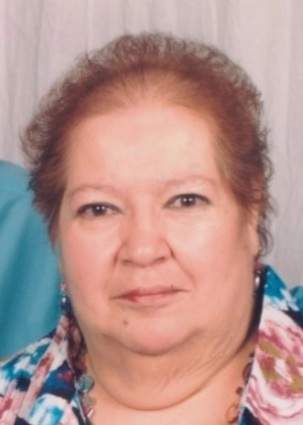 Bernie G. Sanchez, age 73, resident of Rio Chama, NM went to her eternal home with our Heavenly Father, in the evening of October 24th, 2021 surrounded by her loving family at the Rust Medical Center in Rio Rancho, NM.

Bernie was born on May 28th, 1948 in Los Angeles CA, she grow up in Rio Chama raised by her grandparents, aunts and uncles. In her early 20s she met and married the love of her life Joe. They moved to Questa, NM where they started their family, they lived there for 17 years. Bernie was a substitute teacher and substitute lunchroom cook for the Questa schools. In 1987 they moved back to Rio Chama where she’s lived since. She worked as a health caretaker throughout the Espanola Valley. She enjoyed playing Bingo and Slot machines. She was a great cook, always making her own tortillas, bread and pies. Canning fruit and making jelly.  In her spare time, she loved knitting, crocheting, and embroidering.  She was a devoted member of the Holy Family Coro of Chili, NM.

Bernie was a modest woman that wore her heart on her sleeve, kind and generous to all, could never say no.  Spending time with her family was her greatest joy of all, and their love for her is enormous and everlasting. Our beloved mother, grandmother, aunt, cousin and godmother, well be greatly missed by all.

Public Visitation will be held on Tuesday, November 2, 2021 at 6:00 pm in the Sangre de Cristo Chapel of DeVargas Funeral Home & Crematory with a rosary to follow at 7:00 pm.  Mass of Christian Burial will be celebrated on Wednesday, November 3, 2021 at 12:00 pm at San Jose Catholic Church in Hernandez with a burial to follow at the San Jose Cemetery. Serving as pallbearers are Mario, Ira, Joseph Sanchez, Anthony, Ricky, Lorenzo Jr. and Rick Martinez.  The family of Bernice G. Sanchez have entrusted the care of their loved one to DeVargas Funeral Home & Crematory of the Espanola Valley. 505-747-7477 www.devargasfuneral.com

To order memorial trees or send flowers to the family in memory of Bernie Sanchez, please visit our flower store.