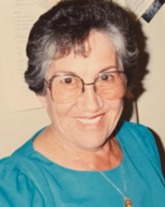 Anita Corina (Martinez) Ramirez was called home by our Lord Jesus Christ on her 94th birthday, December 21, 2022. She was the loving wife of Louis Fidel Ramirez who proceeded her in death; loving mother of Ann, Elisa, Louis Jr., and David; a devoted grandma to Michael, Kristy, Tanya, Joshua, Matthew, and Andrew; and leaves behind eleven great-grandchildren and numerous nieces and nephews. She was blessed with a large family.

Anita grew up on a small multi-generation rancho in Medanalas, New Mexico. This rancho was part of the original Spanish land grants from the early 1800s. The area has a rich history of Spanish culture, and she was proud to have come from such a beautiful and fruitful area. In her early twenties, she moved to Oakland, California to work in her friend’s bakery and met the man she would eventually marry, Louis.

Anita was the quintessential wife and homemaker. She never learned to drive but sewed, crocheted, baked, cooked, and made a lovely home for her family in Hawthorne, California. Anita was raised Catholic, and she raised her children in Catholicism. She was dedicated to her Christian faith and lived God’s commandments to the fullest.

Anita will be remembered for her kindness and deep compassion for others; her excellent cooking; her wonderful laugh and for making God the foundation of her life. She was always available to help with raising her grandchildren and while not having a formal education, had incredible knowledge and wisdom. Proverbs 31:26 says: “She opens her mouth in wisdom, And the teaching of kindness is on her tongue.”

Anita is preceded in death by her husband, Louis Sr., her parents, Belarmino Martinez and Josefita (Madrid) Martinez; her four siblings Olivama (Martinez) Herrera, Abelino Martinez, Antonio Jose Martinez, and Damian Martinez. In addition to her children, grandchildren, and great-grandchildren, Anita leaves behind her nieces Rosina, Maria, and Gloria Jean, whom she was very fond of. She rejoices that she will be united with her family again in heaven.

The family would also like to thank and recognize her two primary caregivers for taking care of her 24/7 these past years, her son and daughter, David, and Elisa.
To order memorial trees or send flowers to the family in memory of Anita Ramirez, please visit our flower store.